Youth & Criminal Justice in Scotland: The Young Person’s Journey is a new, interactive online resource that aims to simplify how the youth and criminal justice system works for under 18s in Scotland. The resource was officially launched by Paul Wheelhouse MSP, Minister for Community Safety & Legal Affairs, on 26 January 2016.

Developed by CYCJ in partnership with Iriss and in consultation with a multi-disciplinary working group, The Young Person’s Journey takes the form of a clickable ‘map’ that details and explains the entirety of the journey a young person can make from an offence allegedly being committed: routes to court, court processes and sentencing; stages in the journey should a young person be remanded or sentenced to secure care or custody or sentenced to a community disposal; and post-sentence support. 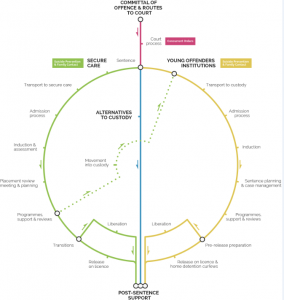 The Young Person’s Journey has been developed in response to a growing awareness that young people are often confused about court processes and the experience of being taken into custody.

Feedback from young people themselves has been extremely encouraging – one young person stated that he “enjoyed watching the short video, navigating his way through ‘the journey’ and compared this to his own experiences of being in secure care/custody. He was able to relate to every stage and gave examples of how he coped emotionally and what helped him through the process. This young person felt that it would have been good to access this type of resource while he was in secure care/custody as this may have helped him to get his ‘head round things a bit better’”.

Feedback has also been received from practitioners, as a third sector organisation describes the resource as “A very detailed and worthwhile tool…. useful as a learning tool for workers to support their understanding of the system, which would in turn increase their ability to support those who have been through the system.  They also recognised that it would be valuable for workers to act as the interface between the tool and a young person, helping to interpret it and draw their attention to areas most applicable to them”.

While it is recognised that, as far as possible, young people should be kept out of the youth and criminal justice system, and considerable progress has been made over recent years in achieving this, this project stems from:

-Recognition of the lack of readily accessible, coordinated information for young people, their families and professionals on the youth and criminal justice system for under 18s in Scotland; and practitioner feedback on the usefulness of a resource to address this

-Research findings on the bewilderment and difficulties often faced by young people and their families in understanding the youth and criminal justice system; subsequent feelings of being lost and unsupported in these processes; and recommendations from research on the need to ensure the provision of clear information about court processes and sentencing decisions;

-Practitioner’s frequently asked questions on specific parts of the young person’s journey and the recognised broadening of the youth justice workforce.

The focus of this resource is on the stages of the journey for young people who progress to court and possible disposals. While it is recognised a number of young people involved in offending will not enter formal systems or will exit the youth and criminal justice system prior to court, the reason for this focus is that these stages in the journey appear to be the least well understood and to have the least readily available information.

By providing a condensed outline of the essential information alongside links to more detailed information, this resource can be used by young people, their families, and professionals across disciplines and at different organisational levels.

CYCJ has committed to updating this resource annually in order to provide the most accurate and up-to-date information.