Launching the Standards in style

“Fun, enjoyment, excitement, and the sense of achievement and pride.” From rapping, gameshows and window art to ministerial support and a competition, launch events celebrating the Secure Care Pathway and Standards Scotland have rewarded and praised everyone who’s been involved in this amazing journey. Debbie Nolan reports back…

It is hard to believe the much anticipated launch of the Secure Care Pathway and Standards Scotland and the associated website was only four months ago.

For the first time, the Secure Care Pathway and Standards Scotland set out what all children in or on the edges of secure care should expect across the continuum of intensive supports and services, applying to all individuals and agencies supporting these children. At the heart of this work were children and young people in, on the edges of, and with experience of secure care, with the Standards and the website fully co-designed and co-produced with their input and agreement.

Brilliant blogs by Beth-Anne Logan (STARR chair) and Paul Sullivan (CELCIS) have eloquently captured the journey so far and the tremendous, tireless contribution these children, young people and young adults made. To quote Paul – “Without their involvement the Standards could not have been developed in the way that they have”.

It was therefore crucial that in launching the Pathway and Standards, we didn’t just focus on the professionals and agencies with roles and responsibilities for implementing the Standards. We also needed to recognise, thank and celebrate with the children and young people who are currently in secure care, the secure care staff who supported their participation and engagement and that of the children who had previously been involved but have since left secure care, and our Standards Champions.

As a result, it was agreed with the Scottish Government, COSLA and Secure Care Group that the launch of the Pathway and Standards would be celebrated with a series of events. The first took place on October 5, 2020, featuring excellent inputs from Maree Todd MSP (Minister for Children and Young People), Councillor Paul O’Kane (COSLA Children and Young People Board member), STARR members, Bruce Adamson (CYPCS) and our own Claire Lightowler. We were joined by strategic leaders from across all the agencies that are crucial to the implementation of the Standards and whose involvement will be essential if the Standards are to meet their aims of improving the experiences and providing better outcomes for children and young people.

Almost 70 participants virtually attended, with extremely positive feedback about the event and the Standards, as evidenced in the quotes below:

“The Standards and how they have been developed should be an exemplar across the world” (Bruce Adamson, CYPCS)

“It was great to be at the launch today – so exciting and encouraging at a time when there’s not so much that’s really positive. I feel it will make a real difference to children’s lives (SPS representative)

“It has been an absolute pleasure to have the opportunity to be involved in this. I am really excited about the positive changes coming as a result of the Standards” (Secure Care representative).

Launching the Standards with children and young people

After this event, our focus quickly moved to what some called the “most important” launch event – one that would take place in the secure care centres, arguably the heart of the Standards. The development of the Pathway and Standards had been a long-term, brilliant piece of joined up working involving children, young people and staff across all five of the secure care centre, and the launch of the Pathway and Standards continued this. Crucial to this work were a small group of “Standards Champions” who had led and coordinated the co-design and co-production activity throughout the development of the Standards in each centre – it is hard to describe how truly grateful we are to this committed, passionate, enthusiastic and creative group of individuals.

In preparation for the launch, the Standards Champions worked together and with the children and staff in each of their centres to run a creativity competition to develop a poster for the Pathway and Standards. All children in secure care at the time were asked to design an image depicting “What the Secure Care Pathways and Standards Mean to Me”. We were absolutely blown away with the creativity, imagination, skills, thought, determination, effort and power of the children’s work. They captured the essence of the Standards and described them more powerfully, better and clearly than professionals or words ever could! Themes of children’s rights, voice, journeys, growth, and hope, and images of hands, progressing on a path and butterflies, permeated through many of the designs. The centres had the daunting task of choosing one (or in some cases merging two!) winners, with these five images then combined into the stunning final poster image below. 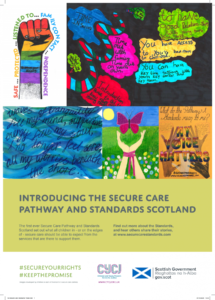 The Standards Champions also worked together to mark the historic launch of the Standards in style (as one of the Champions put it!) with an event taking place in each of the five secure care centres on October 8. This event combined a celebration within each centre individually and all of the centres coming together virtually with the simultaneous screening of a short input from Maree Todd MSP, STARR members, and Paul Sullivan and Rosie Moore (Independent Care Review). Doing so within the context of ever-changing COVID-19 guidance and restrictions, technology, and involving almost 90 children and young people and many more staff was no mean feat – but the hard work and effort more than paid off. All five centres were provided with resources from the Scottish Government and a launch box from CYCJ to help “get the party started”, which included letters written to the children, young people and staff from Maree Todd, Beth-Anne Logan on behalf of STARR, and Claire Lightowler on behalf of CYCJ, and activity and materials to help mark the event and bring the party spirit!

Each centre made the event their own. At the Good Shepherd Centre, young people spent time considering the Standards and used creativity to further demonstrate their significance, by decorating their windows, using bright, powerful colours and compelling symbolism.

At the launch event, the Good Shepherd Centre brought the Standards to life by hosting their virtual Gameshow ‘Set the Standards’, hosted by the incredibly hilarious Qwizzy McQwizface, playing thematic games such as Family FortyFourTunes, Pathway to Puketon and Pathway & Standards Bingo.

A highlight from Edinburgh Secure Service’s launch party was the premiere of Head Teacher Evonne O’Doherty’s rap about the Standards, performed by Elik from Tinderbox Project Performing. This set young people the challenge of working with Elik to develop and produce their own rap about the Standards – we look forward to hearing more!

In some centres the launch provided an opportunity to showcase the young people’s artwork and the Standards taking in pride of place on the walls, as below in Kibble safe centre. 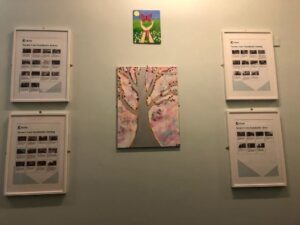 In Rossie Young People’s Trust, not one but two launch events were held to make sure everyone could participate. The young people particularly enjoyed revisiting all their hard work that had gone into developing the Standards, repeating some of these activities like “build it, bring it, bin it” and enjoyed seeing themselves and their images on the Standards website. 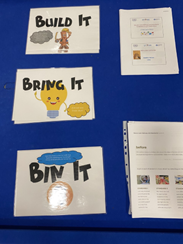 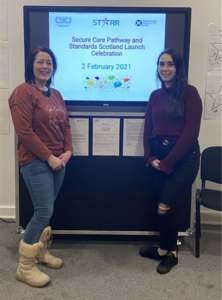 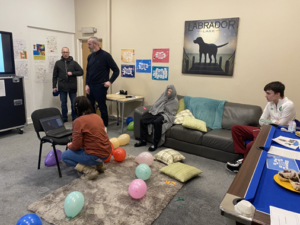 COVID-19 restrictions meant a late rethink to plans for the launch event at St Mary’s Kenmure. However, all staff and young people in the centre participated in an “old fashioned” sports day, where competition ran high, and were rewarded for their hard efforts with a BBQ lunch.

Fun, enjoyment, excitement, and the sense of achievement and pride felt by all involved was abundantly clear across all the five centre’s launch events:

“The event went like clockwork and the kids are still enjoying it. One of the young people said of today “this is like being in a real family”. You can’t get any better than that” (Young person and staff member)

“I hope the Standards will make staff give young people more information about what’s happening to them when they arrive, when they’re in the secure environment and when they leave” (Young person)

“We had a lovely day and the young people and staff have enjoyed the celebrations. The young people have really engaged with the new Standards and some of the thought and efforts they have put into the celebratory events have brought a tear to our eyes” (Staff member)

Since the launch, each of the secure care centres have continued to develop and progress their plans for implementing the Pathway and Standards, ensuring children and young people, their voices and experiences remain central to this. CYCJ has offered support, including the sharing of materials and facilitation of workshops, to each of the centres and continues to offer this to all agencies with roles and responsibilities for implementing the Standards. Within the secure care centres, the Standards Champions remain central to this implementation journey, with the Standard Champions group evolving into an implementation support group, where members can share their journey, learning, experiences, opportunities and challenges in implementing the Standards, as well collaboratively create, innovate and support practice and progress in meeting the Standards. The group has recently benefitted from expansion of membership to include a number of local authority representatives and is open to all agencies with roles and responsibilities in implementing the Standards. CYCJ and Scottish Government are also planning a final Stakeholders launch event for operational leaders on February 25.

If you would like to find out more or discuss the Pathway and Standards, please contact deborah.nolan@strath.ac.uk.

As Practice Development Advisor, Debbie leads on CYCJ’s work regarding children who are deprived of their liberty, looked after children and care leavers. Find out more. 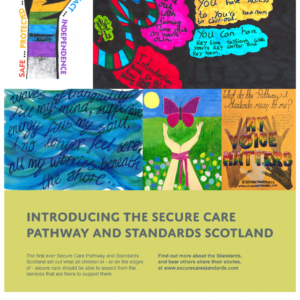