Looking back at her teenage years, Alice (not her real name) reflects on the hurt she experienced and the missed opportunities to do things differently.

I was 13 the first time the police pinned me down on the ground, handcuffed me and put me in the back of a police van. I was 14 the first time they strip searched me and put me in the cells. The police officer who did it, stood watching a crying and shaking 14 year old girl and said ‘if you don’t do it we will do it for you.’ I was 16 when I spent Christmas Eve in the cells all night after being strip searched again. I spent the night in tears scratching my face and pulling my hair out. Within those years I’ve lost count how many times they stopped us in the street, to take drink and fags off us, write down our names, and usually to put me in the back of the police car and force me to go home.

My mum used to hoover the house on a Friday night in advance of the police knocking on the door to bring me home, to come looking for me after I’d done something, or to get details about me when I’d went missing. As ridiculous as that sounds that my mum used to hoover for the police, I guess she felt it was the only thing she had any control over. None of us had control over anything at that point. Only the police, other professionals and some of the people around me seemed to have any power.

They’d turn up at the house other times too, sometimes to charge me. One day, when I was still 15 they turned up at the door with an indictment from the court ready to take me into custody until my court date. I spent a year going back to court and getting reports written about me, and another year on probation. The social worker who wrote my report called me ‘brittle, sullen and uncommunicative’, and she recommended I get a tag and probation. The media printed my full name, address and that I had mental health problems. I still feel the shame years later.

When people talk about children who cause harm to others, I was definitely one of those children. When I look back at my actions, I realise that someone easily could have died, but that child could have also been me. I was being harmed too. The child inside me still wants to know ‘why did no-one care?’

I wonder what would have happened if the police officers who obviously saw me as at risk when they tried to keep getting me to go home, instead asked me why I was doing it, or if I felt safe. Since they were the only ones out there on the streets in a position to do anything, why didn’t they? Why did they punish me instead sometimes just for seeing me as at risk? When I became a risk to other people, why did no-one look beneath the surface to understand the reasons behind it?

When I look back I have struggled throughout the years to see underneath that surface too. The labels and words used by people around me, including professionals, have left a permanent mark on that child. Brittle. Sullen. Uncommunicative. Troubled. Young offender. I still get caught up in calling her those things too sometimes.

But most of the time, I look back and see the scared child that I was, who was trying to do everything possible to escape from being hurt. A child trying to protect herself and find safety. A child who felt unheard and in pain. When I see that child, all I wish is that the police and other professionals had seen her too. 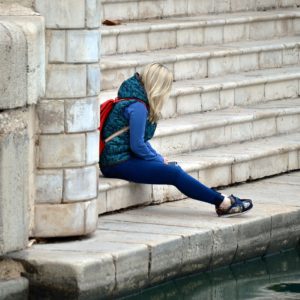