Deprivation of liberty, not dignity

In June 2019, the Cabinet Secretary for Justice announced that SPS will stop the routine body searching of under 18s in custody, in his Response to the Expert Review of Mental Health Services for Young People Entering and in Custody at HMP and YOI Polmont. In this anonymous blog, one young person shares their experience of ‘strip searches’ and the impact these can have on dignity and trust.

As someone who has spent time in prison I have personally experienced the use of external body cavity (strip) searches, the use of which engenders feelings of intimidation and loss of dignity. It is in this context I am writing this blog.

Being sent to prison means you have broken the law; this being the case you do not expect serving your sentence to be a pleasant experience. However, one should expect to be treated with dignity and respect; you have lost your liberty due to making bad choices, but you are still a person with feelings and emotions.

The process of entering prison soon tests this assertion. Upon arrival, having left the ‘modular cell’ of the prison van/bus, which is roughly three feet by three feet, you enter the prison ‘reception area’. Here you are un-cuffed and put into a holding cell commonly known amongst prisoners in Scotland as ‘dog boxes’, described as such due to their size. Initially this experience was claustrophobic, suffocating and distressing.

Next you are taken into a search area, usually a small cubicle, where you are strip-searched. You are asked to remove your clothing one item at a time which is then searched by one of the prison officers (usually two officers) who are watching you constantly throughout this process. Once you get to your underwear you are told to put on your top, then you are told to remove your underwear or pull them down to your knees and shake them. I am not sure why you are told to put clothing on your body at this point, perhaps an attempt preserve your dignity? After replacing your underwear you are handed jogging bottoms and jumper to put on and made to walk past a full-body scanner which checks if you have any metal or mobile phone equipment concealed within your body.

Next you speak to medical staff to discuss any issues, and you are assigned a hall and a cell. Having ascertained you have not introduced any prohibited articles into the prison you hope to get on with serving your sentence. You can do this… until your cell is randomly searched under the auspices of preserving prison security. During these times you are also subjected to another strip-search, along the same lines as described above, but instead of walking by a body-scanner a hand-held metal detector is used to brush over your body. These cell searches usually take place every three months, although in reality it can be more often, particularly if they are ‘intelligence led’ (acting on tip-offs from other prisoners etc.).

After each visit several prisoners are also selected for strip-searches, again apparently random, but it tends to be the same faces. In addition, those who are at the National Top End (NTE) and on a work-placement in the community are subjected to a strip-search every time they return to the prison from work. So those who work five days a week have to endure a strip-search at least five times a week. I do not believe this encourages trust or positivity. If someone has been risk-assessed and is trusted with community access then hopefully they should be afforded a similar level of trust within the prison.

The argument for strip-searches include the safety of other prisoners, safety of staff and security of the establishment. This may be the aim but from personal experience, it is degrading and humiliating. It takes away your human dignity and there is a power dynamic where you are left feeling vulnerable. It is invasive, and at the Prison Officer’s discretion you can also be asked to squat and cough, this is not always the case but it has happened to me several times; this is the most degrading of experiences.

It is questionable whether the value and need for employing strip-searches so frequently is justifiable in relation to the feelings of stress and humiliation suffered by prisoners who experience them. Is there any psychological damage caused by such actions? Or perhaps this is deemed a worthwhile risk when considering the use of strip searches on human beings. I believe the procedure of strip searching could be limited. It would be just as effective, with minimum intrusion, to use the hand-held metal detector to ‘wand’ over someone’s body. Only then if metal is detected should a person be strip-searched or perhaps isolated in segregation, until the offending item is handed over. This maintains safety and security to a high level without damaging an individual’s self-respect and human dignity.

It feels as if the establishment is trying to strip my dignity at every turn. Surely an establishment can uphold human dignity, personhood, and humanity whilst maintaining security? 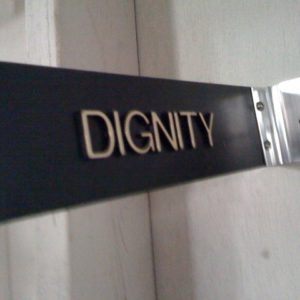