In Part 1 of her guest blog for CYCJ, Angela Morgan OBE considered how personal and professional experience shaped her professional identity as a practitioner. In Part 2, she looks at how these discomforts and tensions played out for her choices in how to be a leader.

On arrival as CE at Includem I immediately had to contend with the drastic effects of the worldwide financial crash and the Scottish Government concordat with Local Authorities on the organisation’s finances.

As well as wrestling with CE imposter syndrome (as a parallel to that SW placement described – waiting to get “found out” ….), I spent a lot of the first year thinking I absolutely had to protect the staff from knowing the reality of the financial risks to the organisation and their jobs. This was even though I genuinely firmly believed and expressed the view that employees are adults and must be treated as such.

I am indeed a Pisces – of course it’s all a lot of nonsense – but I do seem at times to have a remarkable capacity for holding equally opposing positions which in a maelstrom of heat and conflict can be quite useful. This however was a prime example of when it was not.

Eventually the dissonance of this caught up with me in a jolt of realisation that as well as according staff the respect and honesty that underpinned the organisations’ values in work with children, young people and families, honest dialogue with the workforce would ensure that I had heard and considered all possible solutions for our dilemma.

Because of course being a leader – like being a practitioner – does not mean being the font of all wisdom – far from it.

It ultimately didn’t make it any easier for them or me when I had to tell a roomful of staff that services were closing, and they were being made redundant, but I hope it helped to maintain a degree of trust across the organisation which saw us through the crisis and out the other side.

As I increasingly dropped the idea that becoming a Teflon coated/always right leader was a useful model to aspire to I became more comfortable in acknowledging mistakes, apologising where needed – and showing vulnerability.

This personal trajectory of identity most recently included preparation for stepping away from my last full time position (best job in the world – where else would I go!)

And How do I Coach?

This coaching training – the first time ever my practice in engaging with people in real time was observed and critiqued, affirmed the thread of learning I can now see throughout my trajectory from informal carer, via practitioner to leader.

I find that ageing brings some benefits! perhaps one being greater confidence in stripping away white noise to get to the essence of complexity. So, I will state this with certainty:

Trust can only be established and maintained through (evidence of) personal integrity and moral consistency.

As my favourite and well known Maya Angelou quote states:

People forget what you say

People forget what you do

But people never forget how you made them feel

Otherwise I am left with questions, most of which are not around what things should be like (we are good at that in Scotland) but what we need to do to get there.

There is a visible and consistent strand of thinking and debate that resonates for me. The Carnegie Trust are talking about kindness in services; and relationships are now widely  recognised as the bedrock of any service which aims to support people in changing their lives – even in justice where compulsion is the driver ( see recently the very well received Presiding with Kindness visit of USA judges to Scotland’s justice community).

So, there will be no difficulty getting individuals and organisations to sign up to these concepts. The challenge and the imperative is making them happen in practice.

Most importantly how do we:

The Independent Care Review is fuelled by the testimony of care experienced people and the impact of their contact with professionals who broadly recognised and nurtured, or distanced and ignored them.

A prompt for writing this is how much I have been struck by comments like “professional boundaries got in the way”.

Words are so revealing of underpinning assumptions. My personal bugbears are “out of hours”. Whose out of hours are those? Young people in chaos certainly don’t confine that chaos to between the hours of Mon to Fri 9am to 5pm. “Hard to reach young people”. Or is it the services that are hard to reach?

The professional identity and boundaries I was exposed to 40 years ago in that North London placement were not appropriate then and they certainly are not now.

Professional Identity determines our views on professional boundaries. I hope and believe that one of the legacies of the ICR will be to embed an open approach to picking these concepts apart and examining them for their implicit values and assumptions; not just once but as a continuing and healthy process.

What do we need to do so that young people who need support can say “ I knew she was paid to work with me and had a job to do,  but her professional boundaries never got in the way” ?

Angela Morgan was Chief Executive of Includem from 2007 until 2018. She was previously Director of Families Outside which works on behalf of prisoners’ families from 2003 to 2007 and prior to that spent 20 years working in mental health and community care, latterly as Depute Chief Executive, at the Scottish Association for Mental Health. She now pursues her continuing interest in equality and enablement of potential – especially for young people – through involvement in a range of initiatives and organisations.
Currently these include Chair of the Scottish Development Centre, Trustee Vox Liminis , Member of the Scholarships Committee of The Robertson Trust, Member of the Workforce Journey Group of the Independent Care Review. 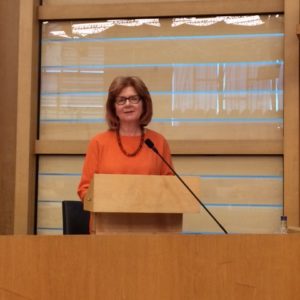