Angela Morgan OBE, former Chief Executive at Includem, shares her reflections on professional identity and boundary setting in a leadership role, in a two part guest blog for CYCJ.

My first placement as a social work student was with a community social work team in north London. My patch was a large scheme of high tower blocks like my childhood home and it felt very familiar.

A strong memory from the experience is of how I felt a lot of the time:

Fraudulent when I knocked on peoples’ doors because I was “just like them” and not a bearer of superior wisdom; fraudulent back in the area office with the social work team who seemed so sure they had the answers to the problems their clients were living with. Whereas I really didn’t think I had.

On reflection I can see I did some quite good work – including when I was able to draw on years of childhood experience of caring for my mother who had mental health problems and often just wanted to feel listened to and validated. But I would never have dreamt of acknowledging this as a driver in my practice and just felt guilty that I was clearly not being “professional” enough.

With the benefit of time and distance I could see that a lot of the discomfort I felt lay in an unspoken but very powerful underpinning assumption that we as professionals/they as clients were different. They were “other” to us.

Professional credibility and identity was certainly very legitimately rooted in expertise in knowledge and skills. However, the assumption of exclusivity in that knowledge and skill set created a division. Even more powerful, hidden and pernicious; evident in language used and assumptions expressed, was what I can only describe as an air of personal and moral superiority.

Thus, a complete set of professional identity armour was in place which was the distorting filter through which engagement and relationships with clients was built.

This was 40 years ago I hasten to add, and I had the benefit of other placements which provided a completely different experience and exposure to professional identity. Working alongside a team who were largely dual trained in social work and community development practice stands out (we need that approach restored!)

However, the discomfort of the placement described provoked some uncomfortable and powerful reflection and it certainly prompted a career-long interest in professional identity and professional boundaries.

My first post qualification job was in a (radical at the time) team to drive a psychiatric hospital closure and resettlement programme. Our underpinning theoretical model was that of “normalisation” formulated by the unforgettably named Wolf Wolfensberger.

In plain language, Wolf’s framework required us in our professional roles to consciously use the filter of the question: what would you want for yourself or someone you love?

This approach by definition explicitly affirmed that behind the roles of professional and client there is common and shared human experience. And it established legitimacy for me in how my own experience informed my professional identity.

It was an exciting time, coinciding with the rise of the mental health “User Movement” which assertively challenged a professional’s right to lay claim to knowing and deciding what was best for individuals when they were not living those individuals’ lives.

I wasn’t the only one on the “professional” side of the divide keen to support this, to learn and to develop my own practice but again the learning wasn’t all straightforward or indeed comfortable.

The liberation felt by so many mental health professionals in working alongside and with, rather than “doing to” people led to some colleagues denying the reality of their power in the relationship, their genuine expertise in terms of knowledge and skills and their responsibilities to protect vulnerable people.

This power and responsibility included necessary exercise of judgement and skills of challenge and disagreement (with respect and care). This was rejected by some colleagues who argued that any perception or decision made by a “client” must be supported, it was a dangerous misperception of the rebalancing of power which left vulnerable people more vulnerable.

What was sometimes also evident as boundaries blurred, was the vital ability of the professional to manage their ego. If we come into our professions with a desire to help, we need to be aware of the seduction of being a hero.

Self-awareness and reflection are crucial in personal understanding of how this motivates us, affects practice and informs the parameters of our professional identity and professional boundaries.

I saw some uncomfortable examples of professional “champions” beginning to claim space and expertise; this time from a different perspective – not in terms of their professional skills and knowledge but in their own experience and emotion. Safe for them to do from a position of power; at its worst I saw unacceptable and manipulative practice in pulling vulnerable people into that space of opening themselves and their emotions up in public spaces – leaving them raw and exposed.

Between these uncomfortable and thought provoking experiences I was also able to observe professionals who seemed to embody purpose, focus and integrity. Their common feature appeared to be personal maturity. Can you train people in that? I don’t know.

Time and experience and where I could, by active choice of organisational culture, enabled me to find my inner guiding professional identity and established the basis for relationships with the people I worked with and alongside. Sometimes I got it right and sometimes I didn’t. My head and my gut have always been my guides for that judgement. It’s certainly the case that if my head is in denial my gut feeling is fairly unrelenting!

Next time : How did these experiences shape me in a leadership role ?

Angela Morgan was Chief Executive of Includem from 2007 until 2018. She was previously Director of Families Outside which works on behalf of prisoners’ families from 2003 to 2007 and prior to that spent 20 years working in mental health and community care, latterly as Depute Chief Executive, at the Scottish Association for Mental Health. She now pursues her continuing interest in equality and enablement of potential – especially for young people – through involvement in a range of initiatives and organisations. Currently these include Chair of the Scottish Development Centre, Trustee Vox Liminis , Member of the Scholarships Committee of The Robertson Trust, Member of the Workforce Journey Group of the Independent Care Review. 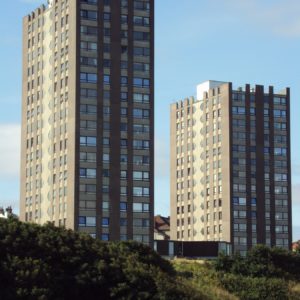