Charlotte Morris attended the launch of the Polmont Youth Theatre in February 2019. Here she explains why the project is already boosting self esteem, increasing confidence and above all, giving hope to the young men of Polmont.

This instruction to the audience at the launch of HMYOI Polmont’s first Youth Theatre captured the tone of what was an extremely inspiring afternoon, filled with fun, laughter, honesty – and a lot of pride.

Following a walk via long corridors, locked doors and barbed wire gates (‘and that’s the short route!’ the security officer assured us) it was a pleasant surprise to find ourselves in a dedicated theatre space, complete with a large stage, control booth and set lights. If the exterior surroundings shouted ‘PRISON’, this room was all about creativity, warmth and hope. There was a palpable buzz to the eager audience, as the stage curtains twitched and upbeat music played.

The Polmont Youth Theatre was set up following the success of MOTION, a play created with and performed by Polmont’s young men exploring identity, inheritance and what it means to be a young man in Scotland today. This was part of the National Theatre of Scotland’s Futureproof festival, a radical programme of productions marking 2018’s Year of Young People. Glas(s) Performance and Junction 25 took MOTION forward within Polmont, with support from the Scottish Prison Service and Barnardo’s Scotland.

With another performance in December – this time the well-loved panto Aladdin – the stage was set for the Polmont Youth Theatre. It is funded and supported by the National Theatre of Scotland, Glas(s) Performance, Impact Arts, Barnardo’s Scotland and Aberdeen Standard Investments, all of whom were present to celebrate the launch.

Although there was input from these organisations, it was immediately clear who was really running the show: the young men of Polmont. Bouncing, jumping and dancing onto the stage to introduce themselves, they were greeted by loud cheers from the audience, many of whom had seen them perform in MOTION and Aladdin.

With around 95% of Scotland’s prisoner population being male, it’s a challenge to find ways to help men channel their aggression, boredom and negative feelings into something more positive. From what the young men told us, the Youth Theatre is already providing an effective outlet for this. “You get to meet new groups of people, new pals…try new things…I’ve gained increased confidence.”

Leaving no doubt about the major driving force behind the theatre, Glas(s) Performance’s Jess Thorpe and Tashi Gore praised the young men: “This has happened because YOU have worked really hard. This has happened because you tried something new. You have talent, commitment and something to offer. We know that you’ll make important theatre about important things. We know that you guys are going to smash it!”

And the encouragement wasn’t just confined to the room. A wide range of actors (with some VERY well kent faces) praised the Youth Theatre via filmed soundbites, telling the boys to ‘break a leg!’ in best thespian tradition. Many attributed their own acting roots to attending local youth theatres and were enthusiastic about the potential within Polmont.

How to produce good youth theatre, the young men pondered. Have a good laugh, build your confidence, try new things, bring out your creative side – feel how you want to feel. Kenny McGlashan of Youth Theatre Arts Scotland told us “Youth theatre is a family concept. Leaders come and go – but it’s always about the young people who make it.”

Playful fun was made of youth theatre stereotypes. ‘You don’t need to be over-enthusiastic or ‘cool’ and there’s no need to play the ukulele – and you don’t even need to wear an oversized stripy jumper or DM boots!’ the lads cheekily told the audience, to a lot of knowing laughter (and some sheepish smiles?). There was truth in the humour though – theatre still remains an inaccessible concept for many in the West of Scotland. Yet hearing about the successful (and incredibly diverse) youth theatre projects around Scotland demonstrated just how hard people are working to challenge this.

Following the launch, the audience were treated to a screening of MOTION. Laughter jostled for place with tenderness; I watched one scene where the young men help each other into superhero suits with a lump in my throat. I won’t give anything else away, as we’re delighted to confirm we will be showing MOTION at the National Youth Justice Conference 2019 – sign up at the end of February!

The Polmont Youth Theatre will now be supported artistically by Glas(s) Performance, with plans to present on its progress in March and a first play planned for summer.

Overall, it was a real privilege to be in that room as history was made. Something amazing has been set in motion, and I can’t wait to see what these young men will do next.

Charlotte Morris is Communications Lead for CYCJ. Find out more. 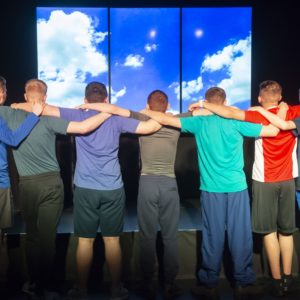