Speaking from the heart

As she prepares to leave her role as director of CYCJ, Claire Lightowler shares why she’ll never stop fighting for the rights of every child and young person in this candid and powerful blog.

This has to be the hardest thing I’ve written because it means acknowledging that I really am leaving CYCJ, and because it’s time to speak from my heart, not just my head.

It has been my privilege to lead CYCJ since December 2013, when I was a mere 34 which seems a long time ago now. When I started at CYCJ the age of criminal responsibility in Scotland was eight, adults needed to disclose a greater range of offences picked up when they were children, and we had a significantly higher number of children going through courts and in YOIs or prison. We didn’t have the Scottish Government’s commitment to keep The Promise, or the articulation of four youth justice promises to be kept by 2024*. It was before the incorporation of UNCRC into domestic law seemed possible, and we didn’t yet understand what this could mean for children in conflict with the law.

I’m proud to have supported and contributed to really important and significant changes like these. But, of course, what I also carry is what we’ve not (yet) achieved, the children who have been harmed and those who have lost their lives because we’ve collectively not done enough. It’s important to celebrate the successes along the way, but we should never minimise the fact that it’s still not good enough. I need to take my share of the blame for this. In my opinion all of us who are paid to improve youth justice in Scotland have to acknowledge that we need to do much better; even when we have the best of intentions and have worked as hard as we possibly can.

Whilst it’s now time for me to leave CYCJ in the capable hands of a brilliant team, I am not leaving the children and young people we are here for. Although I feel like I’ve done everything I can at CYCJ, more fundamentally, I don’t feel like my work is yet done. So, I’m about to start a law degree, with the aspiration of going on to work in the legal system to ensure that children in the justice system have their rights respected.

Since I became the director of CYCJ my analytical skill set is much of what I’ve drawn on to affect change. Yet my belief that we can do better for children in the justice system does not just stem from evidence and data, as important as these are to understand and effectively support change. But the ‘head’ without the ‘heart’ is not enough so I want to share from my heart, why I know we can do better and that change is possible. So, from my heart, I want to share with you one of the most profound moments in my life.

It’s the day of the funeral of a family member who was killed by his step-son. This is an utterly tragic tale, echoes of which reappear in so many other stories I know of. A family in chaos: a context of domestic violence; substance misuse; mental illness; a whole family involved in crime from a young age; time spent in and out of prison; and a young man with schizophrenia turned away from a mental hospital because there were no beds the day before he killed.

On the day of the funeral the neighbours all gathered around. The streets around us are full and the cars have just arrived waiting to take us to the crematorium. From round the corner comes the girlfriend of the murdered man who is also the mother of the boy who had killed. I’m standing next to my dad who sees her, sucks the air through his teeth and says a typically Yorkshire understated ‘ecky thump’. The whole estate seems to go silent as everyone holds their breath. No-one knows what to do or how to think about this. Here’s a woman who loved both the victim and the perpetrator, so how do we treat her, how do we categorise her, should we project our anger and place blame on her, or is she a victim?

One woman knew what to do. She’d lost her son, she understood this pain. The mother of the dead man came out of her house, pushed through all the people, went to the other mother and hugged her. They cried, they hugged and they clung to each other. We all cried as we watched and we better understood.

There is no ‘them’ and ‘us’, none of us can be so easily categorised. It is too simple to blame children and young people for their actions, even when they commit the most serious of offences. The sadness, the waste, the pain is all there. But what stands out for me after all these years is the love and the hope. The bravery and wisdom of one incredible woman to see the shared pain rather than seek to blame. This woman has been my anchor throughout my time at CYCJ. Whatever my contribution has been I have always carried with me the knowledge that nothing I could ever do would be braver than hugging the mother of the boy who killed your son on the day of his funeral.

So, don’t tell me things are not possible…I’ve seen what we are capable of at our best and why we absolutely have to get it right for every child and young person. 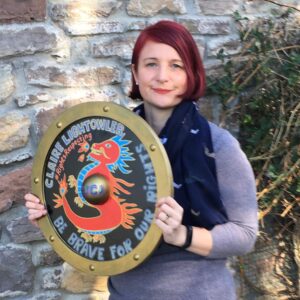