CYCJ Associate Claire Sands is consultant researcher on the Howard League’s programme to end the criminalisation of children in residential care. In her first blog, she tells us more about the programme, why there’s a need for it and what it’s achieved so far.

Hello CYCJ supporters. I’m a new Associate at CYCJ (thank you CYCJ for that honour!) and this is my first post on the blog. I’m a freelance researcher specialising in youth justice and for the last three years I have been working for the Howard League for Penal Reform on a programme of work to understand and address the disproportionate and unnecessary criminalisation of children living in residential care in England and Wales.  I came up to Glasgow to talk to a group of experts about this programme and to hear about the situation in Scotland last May and I’ve been in close touch with Debbie Nolan to learn from CYCJ’s Responding to Offending in Residential Childcare – Next steps project since then.

From discussions with colleagues in Scotland, I thought you might be interested in hearing about how we have been working with the police on our programme. But before I tell you about that, a little background to the work by way of context:

The Howard League’s residential care programme developed out of the charity’s campaign to reduce child arrests in England and Wales. Since 2010, the Howard League has produced an annual report setting out the numbers of child arrests made in the previous year. In 2010, there were over 250,000 child arrests. The number has reduced drastically since then, falling below 80,000 in 2017 (the latest report can be read here).

The charity has worked closely with the police on the child arrests project, visiting many forces around the country to talk to them about what they’re doing to reduce child arrests and the issues that they are encountering. Every police force they spoke to said that call-outs to children’s homes were an issue; some homes (not all by any means) were calling the police out too regularly and for incidents that the police felt a parent would not have called the police over.

I was asked to help scope the extent and, to some degree, the nature of the problem. This was difficult owing to a lack of data and research in the area. Analysis of government statistics gave some insight. This showed, as it’s important to remember, that most children in care are not criminalised in the formal sense of being convicted or subject to a final warning or reprimand. However, the statistics did reveal that children living in residential care in England and Wales were being disproportionately criminalised compared to other children, including those in other forms of care. In 2015, 14% of children living in residential care were formally criminalised, compared to around five per cent in other types of care and 1% of all children. This was likely to be a significant under-representation of the problem since local authorities are only required to report incidents concerning children who have been in care for 12 months or more. Over 50% of children who left care in 2015/16 had been in care for under a year and any incidents of criminalisation involving those children would not be captured by the data collection.

Following the publication of our scoping report, in 2016 the Howard League received support from the Esmée Fairbairn Foundation to do further work in this area. It was decided that the focus of the project would be on collating, disseminating and influencing good practice by the police and children’s homes with a view to making some real, practical difference to the treatment of children and reductions in the levels of criminalisation.

We found that police forces were eager to meet with us to discuss what was happening in their areas and to talk about the good practices they were developing. The problem of disproportionate criminalisation of children in residential care is not new and there had been attempts to tackle it within many forces in the past, but many of these initiatives appeared to have fallen by the wayside along with changes in personnel. Most of the work we were hearing about was relatively new and often in development. There was a real appetite for hearing about ideas from other forces and we found the police open to learning from our research and recommendations.

It became apparent to us that the unnecessary criminalisation of children in care was an issue that had risen up police agendas in the last couple of years. The reasons for this were various: officers were aware of the Howard League’s work and this had clearly played a part in highlighting the problem within the forces we met with; reduced budgets had required the police to look carefully at demand and call-outs to residential care had been identified by many forces as an area that could be productively addressed; and work being done at a national and local level by senior and specialist officers – and the Inspectorates – to  challenge attitudes towards and improve understanding of children in care were leading to reflective, more sympathetic approaches and improvements in policing practice.

A great deal of credit for improvements to the policing of children must go to Chief Constable Olivia Pinkney, the national policing lead in England and Wales for Children and Young People. CC Pinkney developed a child-centred policing strategy which she champions with the Staff Officer for the National Children & Young Persons Portfolio, Caroline Adams QPM, who is also a member of our programme’s Advisory Board.

In 2016, CC Pinkney published a National Strategy for the Policing of Children & Young People. The Strategy identified children in care as one of four priority areas. The Strategy noted that children in care continue to be significantly over-represented in the youth justice system relative to their non-looked after peers; that they are more likely to be vulnerable to becoming a victim of crime or being exploited; and that they are likely to have experienced trauma which will affect their behaviour disproportionately. It urged forces to “make every effort to avoid the unnecessary criminalisation of children in care, making sure that the criminal justice system is not used for resolving issues that would ordinarily fit under the umbrella of parenting”. Police forces must, the Strategy went on to say, “work with our partners to improve our understanding of the child in care to improve outcomes for them”. The success of these messages was apparent at the most recent child-centred policing conference (January 2019) which carried a very positive message about children and young people and the importance of multi-agency working.

I wouldn’t want to suggest that all is rosy with the police and that there are not still areas of concern. Through the course of our research we have heard both good and bad stories about frontline policing and it’s clear that there is still a lot to be done to ensure that every officer in each force has the training – and inclination – to implement the vision of CC Pinkney’s child-centred policing strategy. We have encountered some knotty issues and had some lively debates with officers most frequently on the non-enforcement work some officers are doing with children living in children’s homes. You can read more about this in our good practice in policing briefing. This also provides some case studies of the good practice we have heard about in various parts of England and Wales.

We have found the police to be excellent partners in this project, though, and the work has demonstrated to us how building positive relationships with the police can help improve practice and drive change to the benefit of children and young people.

There’s lots of information about the programme, links to our five reports and to the programme blog, which posts weekly, on the programme webpage. If anyone is interested in the area and would like to get in touch, please feel free. Thank you for reading!

Claire Sands is a freelance researcher specialising in youth justice. She joined CYCJ as an Associate in 2015 – read more.

Inspired by this blog? We’d love it if you could join us to share learning from the ‘Responding to Offending in Residential Childcare – Next Steps’ project and celebrate the Special Commendation for Policy Development received by the project at the Howard League Community Awards 2018. There will be opportunity for further debate and discussion during a panel session. A drinks reception will follow the seminar. Find out more and register – places are limited and will be allocated on a first come first served basis. 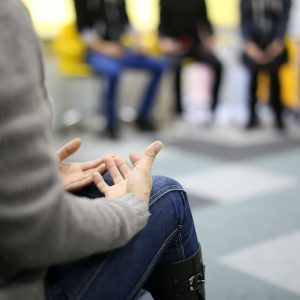