The positively acclaimed STV Appeal ‘Who Cares’ documentary, about what it’s really like to be a looked after young person in Scotland, aired on September 20. Charlotte Morris recalls the stories behind the statistics, and how these can help us create a better future for every child.

Now, go one step further and imagine yourself as a child in this situation. Throw in a major life event such as abuse, neglect or bereavement…and then think about how you would cope. Could you?

This is the reality for many of the 15,404 children who are currently in care in Scotland. It was also the focus of the STV Appeal documentary ‘Who Cares’, which looked at the lives of and outcomes for care experienced young people, and the system that can struggle to support their emotional needs.

The statistics paint a bleak picture: looked after children are 20 times more likely to be dead at 25, more likely to experience health problems and ten times less likely to go to university – or in the words of Ashley “We’re more likely to see the inside of a prison than a classroom.”

Harry, Laura, Shaddelle, Brandon and Ashley spent much of their childhood in care, either in foster or residential placements. They bravely shared their stories for the documentary, discussing the impact being in care has had – and continues to have – on their lives. They were joined by professionals, including Dr Claire Lightowler, Director of the Centre for Youth & Criminal Justice.

“It was the worst day of my life,” recalled Harry, talking about the day he was placed in care. “I was so scared, I knew my life was never going to be the same…and I was right.”

“It’s like moving to Mars,” agreed developmental psychologist Dr Suzanne Zeedyk, stressing the impact such a change can have on a young mind, and why that first day in an unfamiliar environment can set the scene for years to come.

Despite the fact that many young people come to care from backgrounds that are a far cry from the childhood ideal, suffering can go unaddressed by an overworked system. “Pain doesn’t just go away because you’ve got a roof over your head,” said Laura, who used to lose herself in Disney films to avoid the reality of her life. “I ended up locking up a million memories of pain just to get through the day.”

This can trigger mental health issues lasting well into adulthood. “I was 11 when I tried to commit suicide the first time,” revealed Ashley. Self-harm was prevalent, with Laura, Ashley and Shaddelle all cutting themselves for release: “I felt like I was evil inside.”

Troubled backgrounds can unsurprisingly lead to troubled outcomes. Some 33% of offenders in Polmont HMYOI grew up in care.  Brandon, who is currently serving his sentence in Polmont, said the violence in his childhood led to it becoming part of his own identity. “I’ve always seen violence. I’ve always seen people being abused. I’ve seen people getting bullied.”

Brandon was sent to residential care after he was told by a Children’s Reporter that there was nothing more they could do for him. Initially, he settled in well with the help of his mentor, Eddie Hameel, who taught him basic life skills. Sadly, Eddie died and his death sent Brandon reeling and ‘misbehaving’ again. Further deaths in his family meant “it just properly went right downhill from there I suppose.”

Brandon is not alone. Research by CYCJ quoted in the documentary shows that two-thirds of Polmont young male inmates had experienced multiple bereavements (four or more deaths) in their family or close friends. Incredibly 75% had also experienced traumatic bereavement (bereavements due to suicide, murder or overdose). “If we don’t recognise the vulnerability and victimisation in these lives, we’re unlikely to deal with the problems, so they keep escalating,” said Claire Lightowler. In this Scottish Justice Matters ‘Living it’ article, CYCJ’s research lead Nina Vaswani further explores the connection between trauma and childhood offending – what happens when childhood is not ‘the best of times’.

“I would never say anyone is a lost cause. But to some extent, by the time they have reached Polmont so many of those issues are so difficult to unpick. I would strongly argue about investing at an earlier stage to prevent them ever causing harm in the first place.”

Brandon also recalls how in the same week that he stole his mum’s car, he was expelled from secondary school. School exclusion/expulsion can create its own set of problems – it removes previous boundaries and daily structure, and increases the likelihood of contact with others in the same situation. Research by CYCJ found that 80% of young men in Polmont had experienced school exclusion.

And yet Brandon is in a minority – the vast majority of looked after young people do not go on to offend. So why is this? How do these young people manage to move on from the hell of their childhood and achieve positive outcomes?

The young people believe it comes down to two things that so many of us take for granted: relationships and love.

“It’s crucial that every young person has at least one significant other that they can go to” (Ashley). “If young people in the system had even half the support I had, I’d be really happy” (Harry). “All I needed was just one person not to give up on me” (Laura).

Shaddelle remembers her foster mother Hazel reading her a bedtime story – the first time anyone had ever done that for the little girl, who was accustomed to being ‘mum’ for her two little brothers.

Claire Lightowler agreed: “It’s really important to ask why other young people who have experienced trauma, bereavement, loss and abuse, do not go on to offend? We know that’s about having relationships of love, having one person that believes you are worth a better future.”

Chief Executive of Who Cares? Scotland Duncan Dunlop added: “They are children in need of love. How are you going to get close to them and ­understand their lives, and ultimately love them?”

It might have made for difficult viewing, but the documentary was also positive, concluding with Harry, Laura, Shaddelle, Brandon and Ashley meeting Nicola Sturgeon (and getting a hug from her too!). Scotland’s First Minister promised them: “We need to get to the point where being in care means you don’t go through the rest of your life with disadvantages…there’s no point in coming up with strategies if they’re not based on your experiences.”

The outcomes speak for themselves. Harry has just graduated and believes that he’s a “better person” for all he’s gone through;  Shaddelle is studying make up artistry; Ashley is in her third year of university and wants to be an MSP – “if someone had told me four years ago I’d be at uni I would have laughed in their face”; Laura has got the happy family she dreamt of as a wee girl.

And Brandon is looking forward completing his sentence and making a fresh start. “There’s a lot going on for me at the moment. Hopefully a good future, definitely no more jail, no more in trouble with the police, stick in get out of here, get a job, hopefully settle down and enjoy life.”

Perhaps the most inspiring thing was to meet the people behind the statistics, seeing them not as dangerous but as vulnerable fellow humans, who are doing their best to fight the labels, defy the odds and buck the trends. Hopefully the documentary has achieved its aim, in showing that we are all – regardless of our backgrounds – worth a better future.

You can watch Who Cares on STV Player.

For more about the young people’s stories, check out the Who Cares? Scotland website.

CELCIS (Centre for Excellence for Looked After Children in Scotland) provided knowledge and insight into the care system, directing the documentary’s content and background. Check out their website to find out about the valuable work they’re doing and access their resources.

The Scottish Care Leavers Covenant gives an overview of the issues faced by looked after children.

CYCJ’s ‘Secure Care in Scotland – Looking Ahead’ event brought together professionals concerned with the future of secure care and meeting the needs of our most vulnerable and high risk young people. Artist Graham Ogilvie captured the key points visually. View the outcomes here.

Scottish Justice Matters: Living It – Who’s got your back?

The Interventions for Vulnerable Youth (IVY) project was introduced by CYCJ to promote best practice in forensic mental health risk assessment and management for young people who present a serious risk of harm to others – find out more.

Summary statistics for Schools in Scotland

Pictured (from l to r): Harry, Ashley, Shaddelle and Laura. Photo courtesy of Who Cares? Scotland. 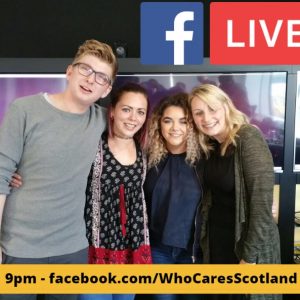