Young People and Communities: Inside or Out?

CYCJ’s latest recruit Claire Francis attended the CYCJ ‘Young People and Communities: Inside or Out?’ event. Here she tells us why she found it so engaging, and what it teaches us about the power of working together.

Have you ever been to a CYCJ event? I hadn’t, but as a new member of the team, the ‘Young People and Communities: Inside or Out?’ event, held as part of the Engage with Strathclyde week, was my first taste of CYCJ ‘in action’. Events like these are one of the many ways that the Centre shares its knowledge and experience with practitioners, stakeholders and the wider community. With this in mind, I was excited to see just how the evening’s programme would encourage all of us to discuss, debate, and learn more about the broad and complex issues surrounding youth crime and communities.

To get to the heart of these challenging questions, it made sense to arm ourselves with the facts, and the research presented by CYCJ’s Research Associate Nina Vaswani was a compelling kick-start to the evening. Gathered from a survey of over 400 young people and more than 200 communities, this data gave us a valuable look into the attitudes of young people and communities when it comes to youth crime. The survey findings were an eye opener – many people were no doubt surprised to hear that in terms of the biggest issues that communities feel they are facing, crime and antisocial behaviour ranks third on the list, behind road conditions and environmental issues!

Less surprising perhaps, but certainly no less important, was the revelation that peer pressure is an enormous factor in youth crime, as we heard that 55% of the young people surveyed cited peer pressure and a desire to fit in as reasons for becoming involved in crime. Along with boredom and a lack of things to do in the area, and difficult family situations, the survey gave voice to the catalysts of youth crime. Not only did the research yield a fascinating insight into the true beliefs and behaviours of young people and communities, it also revealed some poignant truths about the daily challenges faced by young people.

Moving from research findings to presentations, the links between evidence and reality became clear while listening to the engrossing account of Craig, a young man who is using his experience of the criminal justice system to improve things for others . Together with practitioner Janine Ryan of Action for Children’s ‘Moving On Scotland’ project, Craig spoke eloquently and  honestly about his own lived experience of youth crime. It was impossible not to be affected by his description of the immense lure of “respect and power” that motivated his participation in gang-related crime, and his moving reflection that “I thought I was living – but I was just existing”.  Happily, we heard that Craig has managed to overcome his difficult circumstances and is enjoying his new career as a budding chef. To hear this bright young person speak so candidly of his experiences, with both pathos and great sense of humour, was a privilege and a unique window into the reality of many young people in our communities.

Craig’s was a tough act to follow, but speakers Marion Allison and Bharati Bundhoo also delivered equally engaging and enlightening presentations. Marion, an academic with the University of West Scotland/Stirling/South Lanarkshire Council, took a practical approach to research and applied it to our understanding of young people – finding out, for instance, that risk taking peaks at 15 years of age in young people will certainly inform a better understanding of why some young people behave the way they do. Bharati, a representative of Glasgow Life/Glasgow Communities, then followed by explaining how a community garden project evolved to help unite older and younger generations within a community. As she put it: “I always divide the word community – come unity; come and work!”

With the question of ‘inside or out’ shaping the evening’s proceedings, it was fitting that a panel discussion made up the final part of the event, allowing presenters and audience members alike the opportunity to really explore just what role young people play in communities. The panel were fearless in tackling what were some very formidable questions, and the conversation quickly gathered momentum. Do you think communities are responsible for tackling youth crime? Can young people be effective role models for other young people in our communities? How can we get young people into jobs and giving back to their communities? These were just some of the bold and ambitious questions generated in this energetic exchange of ideas. The enthusiastic participation from audience members in the panel discussion was fantastic to see, and it clearly demonstrated the real passion felt by everyone in the room towards creating better outcomes for young people and communities.

We learnt new things, we heard new perspectives and most importantly, we went away feeling inspired about the potential of young people in our communities. 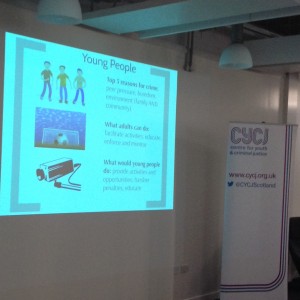