Walking away from the path of least resistance

The process of desistance from crime can often hinge on significant turning points, leading to new directions in life.  In this exclusive interview with Livingston FC manager David Martindale – who shares his own experiences of desistance – Ross Gibson hears how education, employment and a change of mindset can create new opportunities for those in conflict with the law.

Just as I heard from boxing star Vicky Glover, coming into conflict with the law can provide an opportunity to reflect on your circumstances and consider which road to take next. In 2004 – after spending a long Easter weekend in a police station – David Martindale did just that. Facing charges relating to the supply of class-A drugs that would ultimately lead to him being sentenced to a six-and-half years sentence, he realised that his previous decisions weren’t ones he wanted to repeat, leading to him enrolling at Herriot Watt University to study construction management. Fast forward to 2021 and he is manager of Livingston FC, leading them to a runners-up medal in the League Cup Final in February, and keeping them on course to finish in the top six of the Scottish Premier League and with a chance of European competition next season.

He spent the past few months speaking openly and honestly about the circumstances that led to his imprisonment, the opportunities he passed up and how the willingness of others to give him a chance has helped him live a very different life since his release. This led to Professor Phil Scraton writing to the Scottish Football Association in order to support Livingston’s application to have him appointed as full time manager. Even the Daily Mail came out in support. Thankfully the governing body granted him permission to take up the role, with David stating that they had “sent a powerful message out today that it is open to all members of society and all walks of life.”

Growing up in Elderpark, Govan and then Craigends in Livingston, David was familiar with poverty and deprivation, but he had always had ambitions to have the big car, the designer watch and the nice clothes. His lifestyle then was very different to the one he leads now. “I never used to think about actions and consequences … I just done it; up to all sorts. We were in gangs, proper fights, arranged against the guys in the next town, that’s how I grew up, and playing football.”

Football ability earned him youth opportunities at Rangers, before a decision to play in a bounce game with friends resulted in him breaking his leg and subsequently being released. Likewise he had academic potential, but dropped out of school around the age of 14, spending his days with friends playing football. His friends were mostly involved in drinking, drug taking, violence and “up to no good”, with David painting a picture of a culture where such behaviours were normalised. Poignantly, he adds that “I never grew up seeing what drugs did to people, I saw what drugs got people.”

In a climate where attention on the lives of those who are in trouble often focuses on childhood adversity, family circumstances and the home situation, it is refreshing that David situates his difficulties not to be rooted in trauma, but in community influences and his own attitude. In December 2020 he acknowledged that at its core his criminal behaviours were driven by greed when – faced with financial difficulties – he got involved in drug supplying to attain the type of life he had aspired for. It is a point that he stresses when speaking with me.

“I thought it was ok to sell cocaine or be involved in the supply of drugs; it was a designer drug, all the superstars are doing it, everyone is doing it. But when you flip it and look at the addiction, people stealing, affecting families, people going out to rob … I never ever thought of that side of it. You think to yourself ‘are you sugar coating it?’ ‘Are you choosing not to look into it too deep?’ A social worker once said to me ‘you have flexible moral standards’ and when he said that, it actually hit home.”

David’s time in prison and the supervision and support offered has clearly left an impression and he speaks positively about the attitude and approach of prison staff. Moreover, he appears a much more insightful, reflective and humble man than he believes he was back in 2004. He is now in a position to think about where his life took a turn that led him into trouble, and wishes he had heeded the advice of those who tried to steer him in a better direction, speaking with the authority that only those who had experienced those situations have.

“The boys today know they shouldn’t go down that path, but they don’t see anywhere else to go. Where do they go? They are on that path because they’ve had limited opportunities… but how do you change your life? That’s where there needs to be a bit more support. I was lucky with education, but for others we need to work on opportunities for kids in impoverished areas. If you’re on that path it only ends one of three ways: hospital, prison, or either you or your pal dies… they might think that they will be ok but it will be you, it’s gonna be you; it’s just when.”

Acknowledging that he failed to take heed of the advice he once received, he is now the one offering counsel and encouraging others to listen to him, hoping his story can help others stay out of jail; an experience he compared to bereavement and an environment he describes as massively overcrowded and harrowing. “Before I went to prison I thought it was just bad, bad people. When I got there I realised it’s not like that. There was 100 David Martindales; probably 1000 David Martindales…people who have made bad mistakes…and people who hurt others for a number of reasons be it drugs, drink, gambling or experiencing child abuse.” He firmly believes that alongside education, prison changed his life. He regrets, however, not changing it before going there to begin with.

David’s success since leaving prison is – of course – down to him and his commitment to walk away from the ‘path of least resistance’ as he puts it. But he is quick to acknowledge the help of others. His wife who ‘lived a parallel life’ during his sentence, the university lecturer who supported him to restart university after a custody-enforced hiatus, friends who vouched for him and supported his development as a coach, and the football club which could have easily buckled under media pressure when David first began volunteering there in 2014. Looking back, he has been fortunate in so many ways with people willing to provide the opportunities that he has willingly grasped.

Our conversation left me with lingering questions about the support we give to people leaving prison. I’m pleased for David, and I’m pleased that society and organisations have moved on to the extent that he can be lauded as the successful and innovative football manager that he is, rather than castigated for his prior choices. I’m also pleased that there are those who went out their way to offer the support. At the same time, I wonder what is to become of the other 1000 David Martindales he encountered in prison; will they have the same opportunities and support when they leave?

We need more employers, friends, and businesses to create these opportunities, to provide support and to utilise the talents that people leaving prison possess. Failing to do so would surely be missing an open goal. 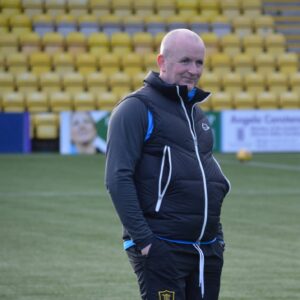