The spirit of the Youth Justice Conference

Six years on, six youth justice conferences in the bag…and I’ve learnt the answer to that one is, pretty hard, actually. It’s been six years of militant planning, definitely sweating the small stuff, an agony of application sifting (probably a blog in itself), quibbling over menu choices…oh, and all while trying to attract speakers and workshop organisers of a quality calibre – on a no fees basis.

Fortunately, every year it’s come together – thanks to brilliant speakers, amazing participants and the spirit of the conference itself (and I’m not talking about the late night bar), and of course the hard work of the CYCJ team and the conference working group, who make the magic happen.

Sadly, 2020 is the first time in 12 years that we haven’t had a conference, due to coronavirus restrictions. To mark the date it would have taken place (17th and 18th June) I’m taking time to reflect back on six interesting, at times infuriating and intensely exhilarating years of organising the National Youth Justice Conference. From the speakers who shone, to the disco lights that sparkled, from Dundee to Stirling, read on for my #YJconfbestbits….

First year in the game, and a steep learning curve! I recall the first conference meeting I attended. I said very little, took LOTS of notes and silently panicked about how I was going to possibly pull off this event, a clear favourite of the Scottish youth justice scene.

Despite my panic, I got stuck in and picked up lots of tips along the way – did you know Strathclyde University had a Tuesday Club, aka a group of very pleasant retired women who, for the price of nothing more than posh biccies and the loan of a rubber thimble, would deftly assemble 200 plus conference packs, name badges and leaflets in under an hour? A real conference tradition, sadly no more.

Although it did get off to something of a sweaty start (thanks to the lift in our building not working = lots of hefting heavy boxes up and down six floors during one of June’s hottest days), my very first conference was a triumph. We heard from amazing speakers over two days with different themes. These included Professor Dame Sue Bailey, of the Royal College of Psychiatrists, Olive Moloney of MAC-UK and Neil Hunter of SCRA – and our new director, Claire Lightowler, was chair for Day 2. 2014 introduced the first conference twilight session (combining learning with wine, a genius move really) which featured me talking about social media, and there wasn’t a dry eye in the house when Vox Liminis rounded up two excellent days with a stirring performance of songs written by inmates in Scotland’s prisons. This was also the first year we introduced young people as co-chairs – with Ashley Cameron of Who Cares? Scotland emphasising the importance of relationships over systems. You can read more in Linda Robb’s blog.

I also learnt a very important lesson…don’t overdo the partying, well, not if you’re the conference organiser anyway. Day 2 was a grim experience as I battled to hide my hangover whilst trying to keep the show going on.

Perhaps because of the previous year’s stress, I got pregnant and managed to avoid 2015! Along with another pregnant colleague, we baked chocolate cakes to mark the occasion (complete with dodgy icing hashtag) and enjoyed the action via Twitter (annoyingly – to me anyway – the conference hashtag was even trending at one point. And if you don’t know what that means, then you clearly missed my 2014 social media session). Delegates enjoyed a welcome address from the new Minister for Justice, Michael Matheson MSP, and talks by Martin Crewe, Director of Barnardo’s Scotland, and Jim Gamble QPC, former Chief Executive of the Child Exploitation and Online Protection Centre. I couldn’t comment on the behind the scenes action, but I’m sure you will all have your own stories to tell?

I was back – and determined this year would be the best yet! Albeit upstaged by a large elephant – ‘Elphie’, aka the inflatable elephant representing ‘Positive Prisons? Positive Futures’, was the undeniable highlight of 2016, leading to the invention of the #elphie (see photo).

Eminent speakers included Frances Crook, CEO of the Howard League for Penal Reform; Sheriff Alistair Duff, Director of Scotland’s Judicial Institute, and Forensic and Clinical Psychologist Professor William Lindsey. Max Rutherford, then Criminal Justice Programme Manager at the Barrow Cadbury Trust, travelled up from London to give us an insight into adolescent brain development and offending, and we also heard from Scottish Throughcare and Aftercare Forum (Staf) The Voices project and enjoyed another emotional performance by Vox Liminis at our twilight session.

No partying for this sleep deprived new mum, unfortunately I was subjected to it anyway as I had the bedroom next to the after party…

2017 brought with it another pregnancy…but I was still at the helm (along with Elphie. Again).

As it was our tenth conference, we wanted it to be special, bringing in a film maker to produce a short film (and I discovered how it’s easier getting blood out of a stone than it is to persuade a reluctant youth justice practitioner to be filmed).

This year bought a change of venue, as the conference moved from Dundee to the University of Stirling’s Court Hotel. Luckily this move was greeted with positive feedback from delegates (although I know many of you are still mourning the loss of the bacon croissant. We’re working on it).

It was also the year of our first international speaker – Jan Erik-Sandlie, Deputy Director General of the Norwegian Correctional Service impressed delegates with his dry wit as much as his insight into the Scandinavian approach to youth justice. Early Years Research Scientist and leading attachment expert Dr Suzanne Zeedyk was a conference hit – and ‘old timers’ Tim Chapman and Bill Whyte revisited the conference podium after a decade.

Memorable moments…a hip-hop dance off led by performance artist Chaz Bonnar, who had everyone on their feet throwing shapes!

Year 5 – Narrowing the gap: transitions in education and justice

Another year, another maternity leave. However, my colleague Kristina and I were determined to get to the conference – babies and all! We only managed Deputy First Minister John Swinney’s welcome address before the babies decided enough was enough and we had to bow out. This was our first joint conference – held with Education Scotland. Delegates heard from Professor Divya Jindal-Snape from Dundee University; Alan Milliken, Head of Communities and People, Children, Communities and Enterprise Directorate at Stirling Council; and Catherine Dyer MBE, Chair of the Expert Group on preventing Sexual Offending involving children and young people.

Year 6 – Youth Justice Through the Ages

Our 2019 conference game was strong (and not just because I was back). We held our very first ministerial double header, thanks to Cabinet Secretary for Justice, Humza Yousaf and Maree Todd, Minister for Children and Young People, who also took questions from practitioners and the Youth Justice Voices Youth Just Us group. This was the year of the ‘lightning talk’ – another way of keeping tired brains engaged and inspired via shorter talks. They were a big hit – look out for them becoming a programme staple.

The impressive line-up featured talks by Bruce Adamson, Children and Young People’s Commissioner Scotland; The Right Hon Lady Dorrian, Lord Justice Clerk and President of the Second Division of the Court of Session; and Tim Bateman, Deputy Chair of the National Association for Youth Justice. Day 2 belonged to Professor Nancy Loucks OBE, Chief Executive of Families Outside and Vonnie Sandlan, Co-Chair of the Independent Care Review; and Fergus McNeill, University of Glasgow, accompanied by singer Donna Maciocia. We also enjoyed two short films – The Close (an interpretation of The Crucible acted out by children at Kibble Education and Care Centre and supported by Scottish Ballet), and the first public screening of MOTION, a film made by the young men in HMP&YOI Polmont.

And…that’s all folks! Rest assured we WILL be back for 2021, better and bigger than ever. If there’s something I’ve taken from my years of planning this conference, it really is the people that make it. The National Youth Justice Conference is known for being friendly, fun and inspiring – and every year it’s a joy to see old and news faces queueing to get in (even if I am once again panicking about there being too many people and not enough seats). 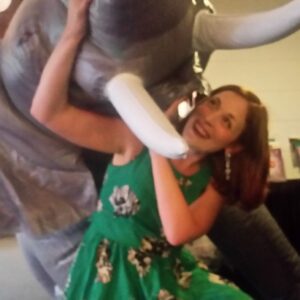