The potential to do more than just survive

In this month’s Year of Young People blog we hear from an anonymous contributor who reflects on her time in foster care and her determination to ensure that her past does not define her future.

Around the age of 14, waking up from a coma following an overdose of tablets, I felt cheated and confused. I could not understand why my worthless life had been allowed to continue, or why I was being so cruelly punished. I felt embarrassed in believing that the combination of over 140 painkillers and sleeping tablets would have been enough.

Days of terrifying hallucinations that followed compounded my feeling of being completely lost. I saw my foster carers’ words to me written on the window: “ugly”, “fat” and “stupid”. I had been so miserable and felt so trapped when I took the tablets that I did not see any other way out of my life at the time.

I told everything to the psychologist in the hospital, as I felt that now I would be taken seriously. It was not enough. The foster carers made up a false story to distract attention away from their abusive behaviour. I was returned to the foster home and made to feel guilty for causing the foster father to have a heart attack. Razors were removed from my room and my behaviour was scrutinised even more than usual. There was no support or therapy and I was left feeling constantly guilty and weak. Guilty for what I put my sisters through. The foster parents. The social worker.

It was a turning point in my life. I came to believe that I was kept alive for a reason and I was not going to waste my life in any way again. I decided to fight as though I had been given another chance. I was determined to make my life worthwhile, even though I did not think I was capable of much.

I was not clever at school. I was mostly in foundation and general classes, which I felt I had to live up to and not expect to achieve beyond that. I really enjoyed English, and I asked to be moved up to a general credit class, but the teacher laughed it off. Following an exam I was moved up, although I did feel plagued by a sense of not belonging and not worthy of such a place.

Very early on I became aware of the stigma attached to being in local authority care. My peers thought that I had been ‘bad’ or ‘in trouble’ to be in care. I completely understand why some young people may feel tempted to live up to that expectation, to get some respect or attention. For me, however, it was a role I could not fake. It was not in my nature and I was very socially conscious. There was also no way I could not tell the truth about the secrets of my shameful family story. Without a mum or dad, I felt as though I never fitted in. It somehow made me feel that I would never be good enough, that I was a burden and that I would always be at a disadvantage.

I undertook an HNC in social care and I was the only one in my class to be accepted into University. I could not believe it and I thought there had been a mistake. I proceeded to undertake a BA in Social Work and each time I got past a year, I felt that my luck was going to run out and I would eventually be reminded that I was expecting too much. I learned during my first year at university that only 1% of young people who leave care go on to University. I felt a mixture of pride and discouragement, thinking that there was a reason why the statistics were so low and there was no way I could overcome such a high barrier. I gained my degree but couldn’t shake the feeling of not being worthy of it, telling myself I was foolish to think that I could achieve success given my roots. It was almost as though I had been dealt a card and I had to just accept it instead of trying to be something I wasn’t.

I proceeded to work as a social worker for 12 years with children and families, as an Early and Effective Intervention / Whole System Approach Co-ordinator, and then in Criminal Justice. When young people or families became aware that I was brought up in care, it broke down barriers immediately. I felt I could be a positive role model to other young people who, like me, saw no other future, nothing better.

When working in Criminal Justice, I met so many who had been so traumatised by their childhood experiences, had no family support and no self-belief. I could see myself in them. How could they expect to be anything more than they were? They had no supportive family or positive role models to fight their corner and believe in them. I saw potential in every one of them and I was determined to build on their strengths and encourage them to believe in themselves. I think it’s a huge barrier for anyone who has been brought up in a chaotic home, or suffered neglect, to see that they have potential to do more than just survive.

I recently took the leap and left social work to study my Masters in Criminal Justice. I have learned only recently that it is my personality, interpersonal skills, resilience and problem solving abilities that enable me to push boundaries and exceed even my own expectations. I always think to myself that if I can get through the trauma that I suffered as a child, then I can get through anything as an adult.

I believe that everyone has potential and I want to use my personal and professional experience to advocate for and empower others. I have a real thirst for learning now, and I am considering a further degree in law. I am so proud to be a mum to a loving, creative and thoughtful boy, and I want him to understand and be proud of me one day. I am so glad that my life did not end at 14. There is so much more I want to do, and look at all I would have missed.

If you or a young person you work with would like to provide a blog about the Children’s Hearing System, Court, residential care or other aspects of growing up in Scotland please contact Ross Gibson to discuss. 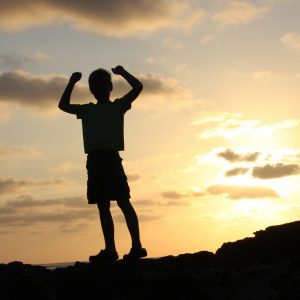